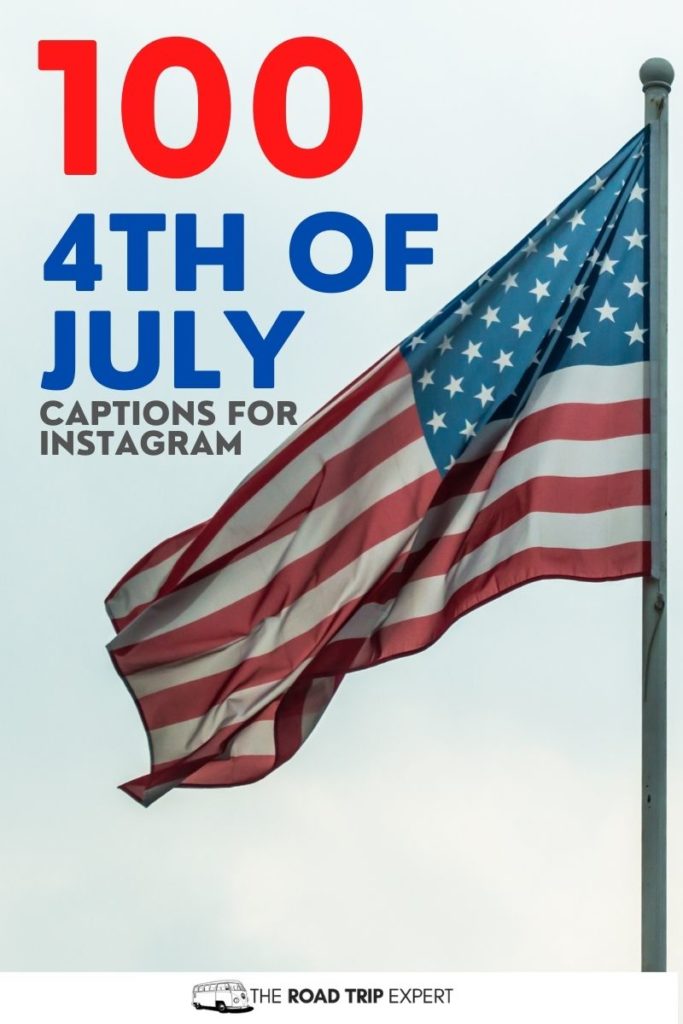 This is the definitive list of the best 4th of July captions for Instagram posts. On this patriotic day, we hope you’ve had a fantastic time with family and friends. This wonderful day celebrates the declaration of independence of the United States.

If you’ve taken some great photos feel free to use this list of funny 4th of July quotes to describe the moment! Everybody loves a bit of humor. There’s nothing better to add to your post than one of these hilarious 4th of July puns!

Dreams are the foundation of America.

Why are there not any knock-knock jokes about America? Because freedom rings.

Sorry, can’t hear you over the sound of freedom ringing.

“Brought to you courtesy of the red, white, and blue.” —Toby Keith

Land of the free, because of the brave.

My heart sings for freedom

“America, to me, is freedom.” –Willie Nelson

I think I know which holiday is America’s favorite.

America is another name for opportunity.

Give me liberty or give me death.

America because, where else?

“He makes me melt like a popsicle on the Fourth of July.” –The Little Rascals

“She was an American girl.” —Tom Petty

Land that I love.

We, the party people.

Man, it feels good to be an American.

Have a Yankee doodle day!

The party doesn’t start until I walk in, right?

One flag, One land, one nation evermore.

June is already over? Julyin!

What did one flag say to the other flag? Nothing. It just waved.

Did you hear the joke about the Liberty Bell? It’ll crack you up.

It’s a party in the USA.

A battery and a firework were arrested. One was charged, the other let off.

Red, white, and you.

It’s not the Fourth of July until I’m holding a hotdog.

“Sparks in the air like the Fourth of July.” —Nicki Minaj

“Raise a glass to freedom, something they can never take away.” —Hamilton

Pretty sure I was a sparkler in another life.

If it involves fireworks, barbecues, and freedom—count me in.

Turn up the sparklers and the speakers

“Only in America where we dream as big as we want to.” —Brooks & Dunn

Too many sparklers?! The limit does not exist.

America’s been spilling the tea since 1773.

Freedom lies in being bold.

Proud to be an American.

Sparkling so hard, I could be a firework

Do you even grill, bro?

Sending love to the land of freedom.

Today we all share the same sparkle in our eyes.

You’ll be my American boy.

Grill, or it didn’t happen.

I American’t even right now.

Food, family, Fourth of July, and fireworks. The four best F words ever.

I’m just here for the BBQ.

Pies, fries, and the Fourth of July.

Happy Birthday to my favorite country

My dietary request for your Fourth of July BBQ is wine, please.

Red, white, and my crew

My favorite color is freedom.

“In America, in America. My hope, my prayer in America.” —John Legend

I like my beer cold, my coffee black, and my tea in the harbor.

Too cool for British rule.

Talk about a birthday party!

If you didn’t grill, did your Fourth of July even happen?

Here’s to the stars and stripes.